First Serve: Players on the north side serve first.

Changing Sides: By mutual agreement players may or may not choose to change sides at 6 points.

Game Length: Games are to 11 points, scoring only when serving, win by 2 points.

Kitchen Intrusions: Players may call Non-Volley Zone Violations and foot faults on the opponent's side of the court. If there is any disagreement among players about the called fault, a replay shall occur.

Food and Drinks: Food is not to be brought onto the courts. Drinks are to be placed just outside the courts.

Equipment Bags: They are to remain outside of the courts. The bags should be hung on the hooks attached to cords on the outside of the fences. Please do not place bags on the bleachers. Those are reserved for people to sit on.

Footwear: Court or athletic shoes only are permitted on the courts. Flip flops, slides, sandals and other casual wear shoes are not to be worn while playing pickleball. High heels are not to be worn on any areas painted green including the space between courts 5 and 6.

Music Policy:  With respect to the Pictona membership, music devices other than headphones are not to be played at Pictona.  Pictona realizes that many players enjoy music while playing, but other players in close proximity may not share the same musical tastes. Friday nights are Music Night where Pictona provides music throughout the entire facility from 5pm – 9pm. In fact, due to its popularity, we've extended our hours for Friday Night Music Night.  We hope to see you here!

Space between Courts 5-6. Bleachers are provided for viewing play on these courts. Please do not bring additional chairs into this area because the surface is sufficiently soft that they may poke holes or divots into the surface. 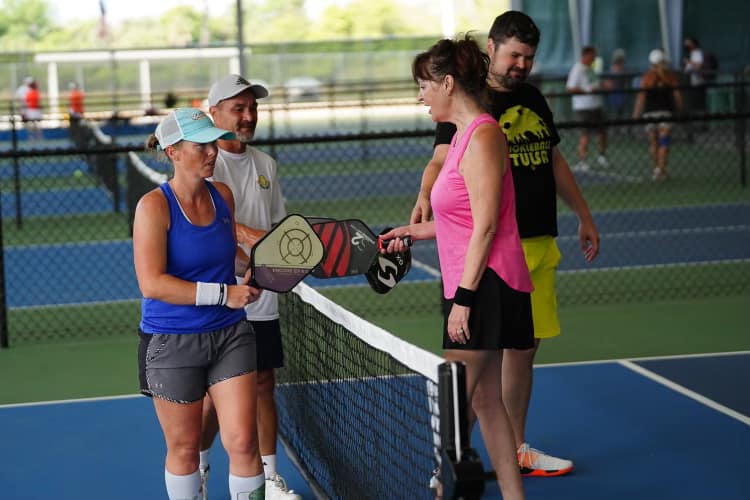